The patented, Erickson Migrating Combustion Chamber (MCC) multi-fuel engines use an orbiting piston in a scotch yoke mechanism providing four, ported, variable volume chambers with only three moving parts.  It’s a new mechanism and cycle of operation that is radically different than conventional piston and rotary (Wankel) engines.  The Erickson MCC Full Expansion engine is the first practical full expansion engine.  True full expansion is achieved when gas expansion continues inside the mechanism to a final volume 3.5 times the original swept intake volume.  This allows the gas pressure inside the engine to continue doing work down to atmospheric pressure verses wasting the exhaust energy as in conventional engines.  The full expansion process uses most of the available energy to produce work.  This results in increased efficiency and a cool exhaust without any exhaust blow down noise.  Exhaust temperatures range between 250 to 350° F verses over 1000° F for conventional engines.  The MCC engine’s over-expansion does not come at the expense of reduced power like over-expansion does in the modern Atkinson cycle engines that are typically used in Hybrid automobiles.  Full expansion in MCC engines captures energy normally lost out the exhaust in conventional engines, because of their limited Otto cycle expansion ratio.  John B. Heywood, author of Internal Combustion Engine Fundamentals, states that “Significant increases in efficiency can be achieved, especially at low compression ratios” in over-expanded engine cycles (p. 185, McGraw-Hill, Inc., 1988).

A simplified method to illustrate the efficiency advantage can be achieved by analysis of the pressure/volume (PV) diagram of a typical conventional Otto cycle engine and the MCC full expansion engine as shown below.  The pressure inside the expansion chamber of the MCC engine is fully expanded to atmospheric pressure (at point F) before the exhaust port is opened.  The enclosed gray area FEDF is a representation of the additional indicated work the MCC engine produces over conventional engines.  Typical conventional piston engine exhaust ports open at point D when the pressure inside the combustion chamber is 70 to 100 psi.  This causes a very loud out rushing of hot high pressure gases which is wasted energy. 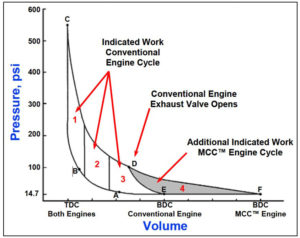 MCC full expansion engines inherently have reduced emissions as compared to conventional Otto cycle engines. Carbon Monoxide (CO) primarily caused by the rapid blow down exhaust is substantially reduced due to the controlled full expansion and the lean operation this provides.  Hydrocarbons (HC) are reduced due to the continued expansion which promotes more complete oxidation of the Hydrocarbons. Oxides of Nitrogen (NOx) are reduced due to lower working combustion ratios and lower peak combustion temperatures. Nonsymmetrical port timing allows precise timing of port opening and closing for induction without affecting the timing of the port opening for exhaust which reduces lost fuel through the exhaust port.